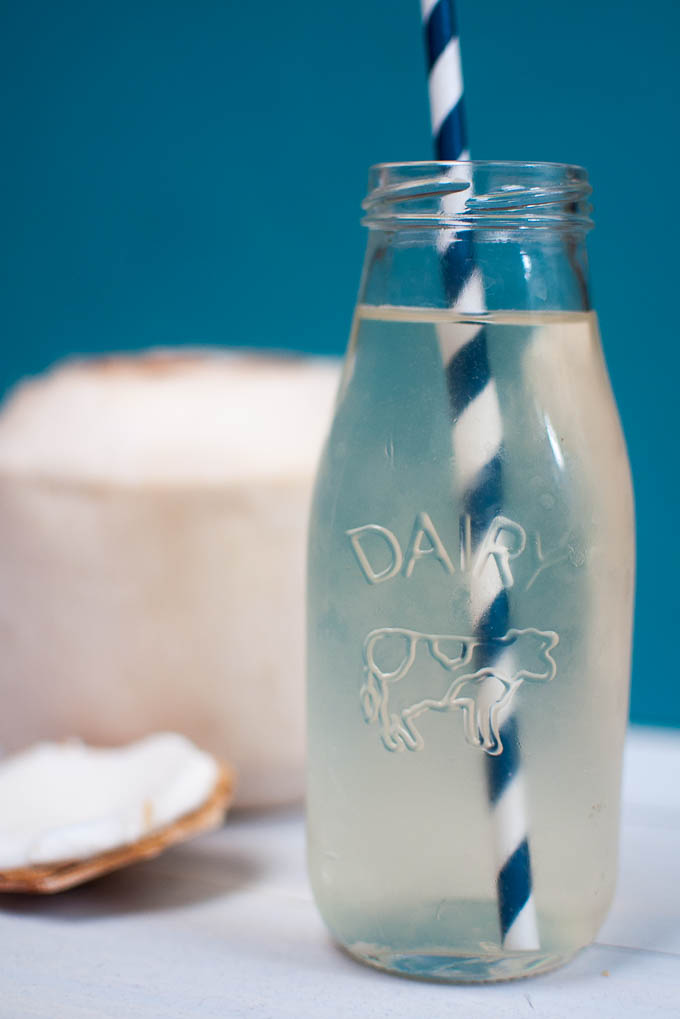 The first time I tried fresh coconut water I thought it tasted like dirty socks. It was back in 1994 before coconut water became popular in the US. I’d just arrived in Costa Rica where carts of fresh young coconuts or “Pipas” were being sold for 25 cents each.  My friend handed me this giant green bowl with a straw popping out of the top that had been hacked off with a machete. The bowl was brimming with a golden liquid which to me tasted “off”.

My friend insisted that I hydrate my body after the flight and she rattled on about how healthy this vitamin rich elixir was. Her enthusiasm was catchy but she sold me on the prospect that these unruly nuts prevent aging and weight gain. Pretty soon, I was drinking one a day and loving how great I felt.

Coconut water is incredibly hydrating and your body will love how nutrient dense it is. The flavor quickly grew on me and honestly – who wouldn’t drink the fountain of youth for that price???? 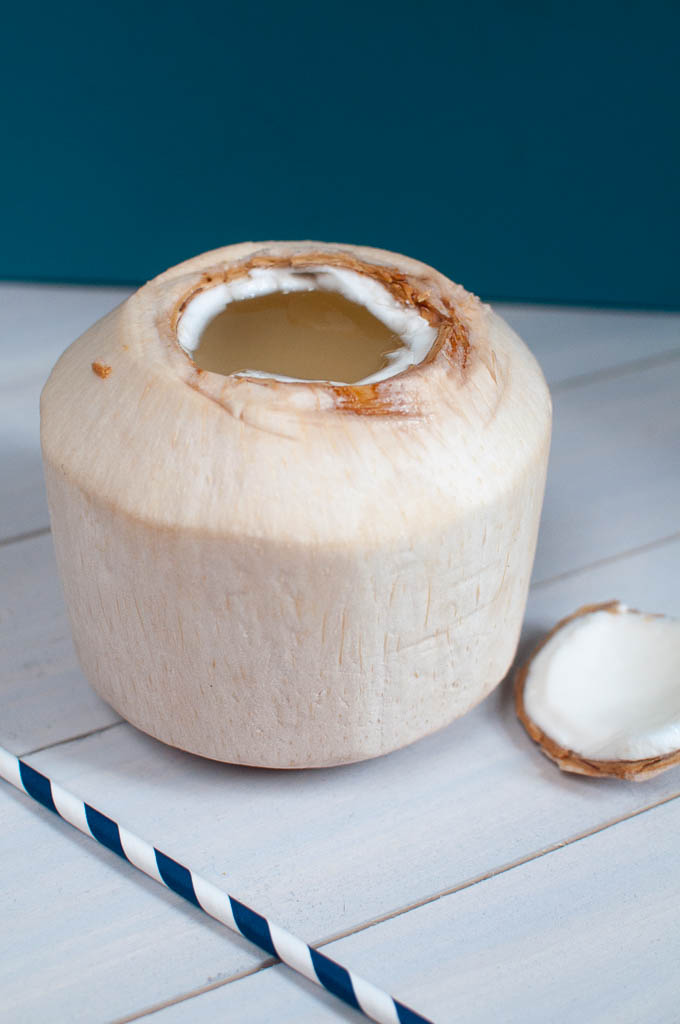 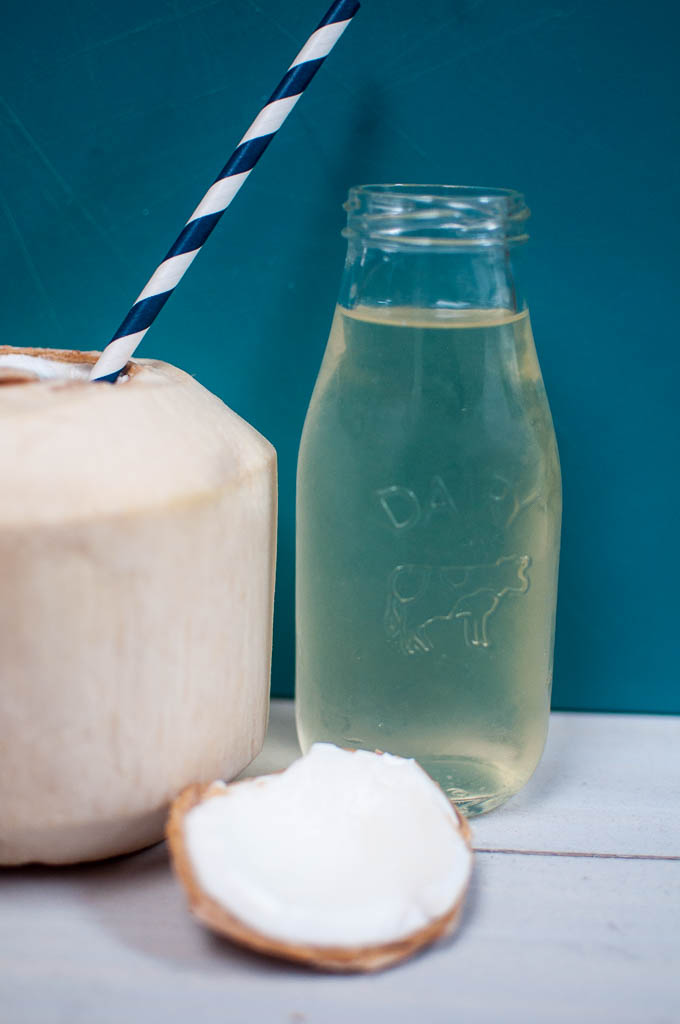 In 2004 I saw these magical nuts again on the dusty streets of Mysore, India.  A rusty pick up truck piled high with coconuts was faithfully parked outside the yoga Shala each day. Like a gift from the Gods, it delivered fresh coconut water to parched yogi’s. Dubbed “natures electrolyte drink” young coconut water was the best way to recover after a long and sweaty practice.

I loved the yoga but equally enjoyed the reward that awaited me at the end.  I’d approach the truck in my sweat drenched yoga clothes and cherish each sweet and cocnutty sip until it was done. And at TEN CENTS EACH, I occasionally splurged on two…..

It wasn’t long before coconut water caught fire in the United States gracing the shelves of Whole Foods and Trader Joes. Now, boxes and cans of it are sold everywhere. But like most processed foods, much of the nutrients and vitality is lost and the final product is far different from the original one. Here is a great article by Foodbabe on the good vs bad coconut water brands: How To Buy The Healthiest Coconut Water And Avoid The Worst!  I also like this article on the benefits of coconut water by Dr. Axe.

Like most things, coconuts are delicate and best when consumed FRESH. For a long time, it didn’t occur to me to open one at home. It’s not like I own a machete. But after watching a few utube videos, I felt confident to try and it was easier than I’d imagined. Here is an instructional video: How to Open a Young Thai Coconut.

Not only do you get the maximum benefits from the fresh coconut water, but you can carve out the coconut meat and use it to make vegan yogurt, add it to raw soups or freeze it for velvety smoothies. 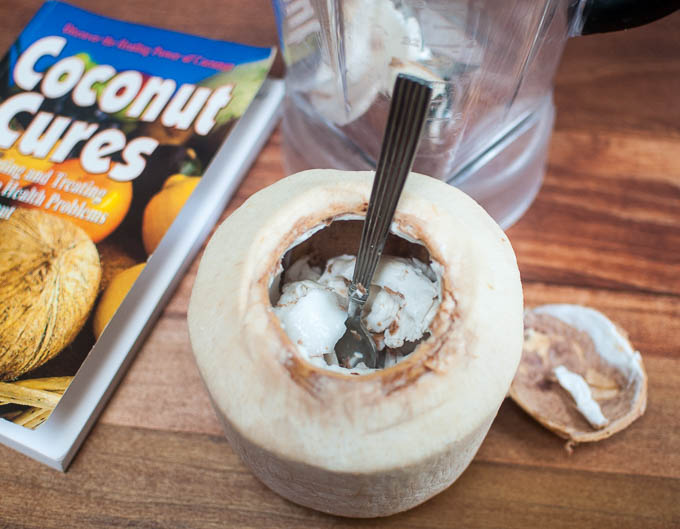