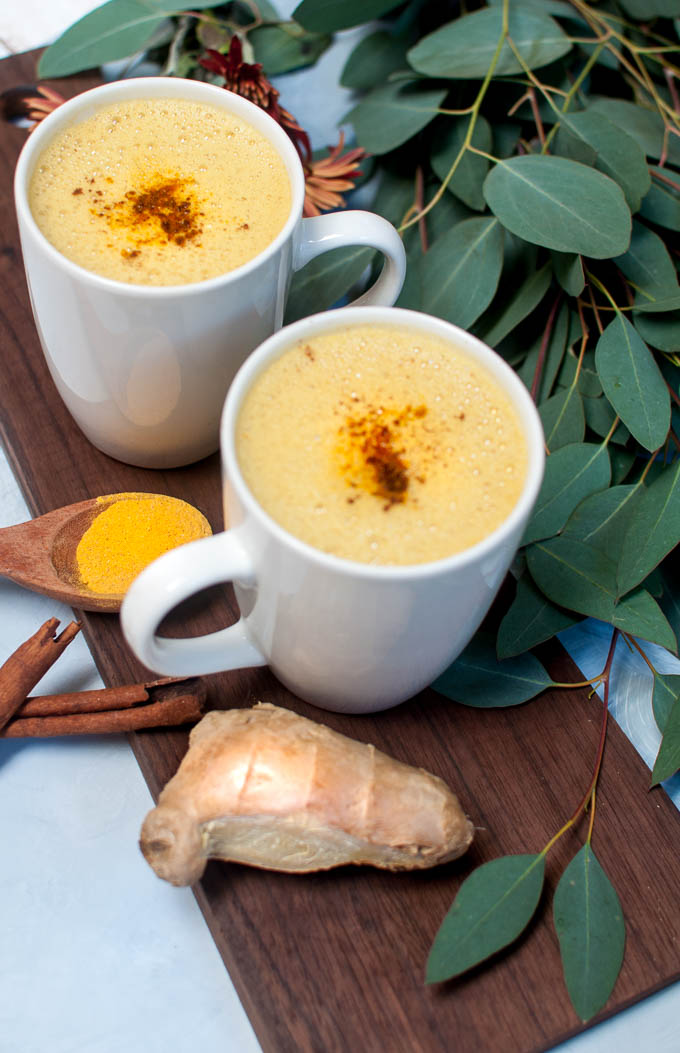 So, what do you think of the Golden Milk trend?? Are you on board with sipping this hot Turmeric Ayurvedic drink or would you rather have a hot cocoa or pumpkin latte??? Since I’m a sucker for anything “healthy”, I had a bee in my bonnet to try making this at home. My Kind Organics Golden Milk powder was on sale, so I bought it out of curiosity and played with the recipe to customize a yummy, frothy GOLDEN YELLOW hot liquid beverage. 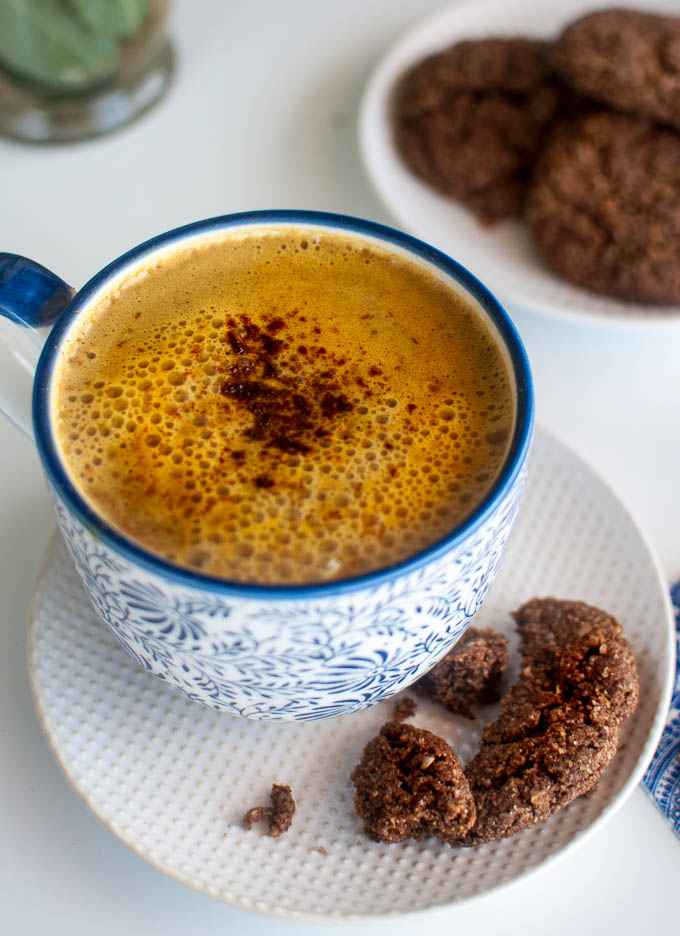 What is Golden Milk?

Milk infused with Turmeric called Haldi Doodh in India, has been around for a long time. But, this Ayurvedic drink is now becoming popular in the US. It’s bright yellow color derives from it’s main spice, Turmeric, a mustardy, gingery, bitter spice known for it’s anti-inflammatory properties and golden hue. According to Ayurvedic medicine, Curcumin, the active ingredient in Turmeric, has many health benefits. Black pepper helps maximize absorption so it’s added along with cinnamon, ginger and a sweetener such as dates, maple syrup, stevia or honey. 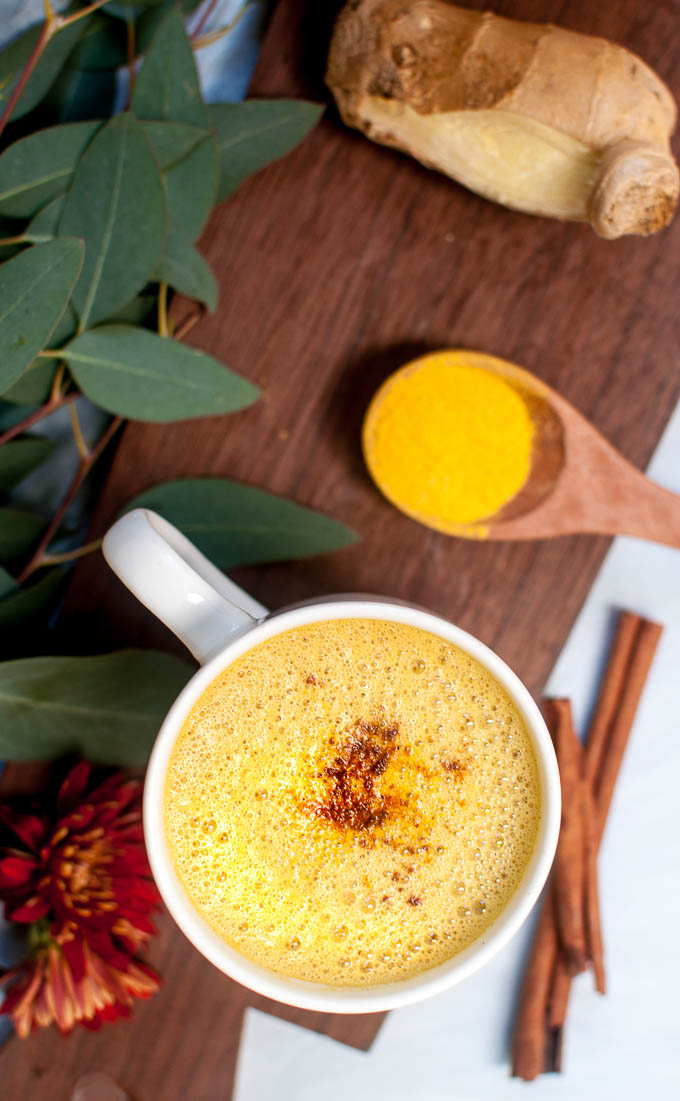 The Pros and Cons of Golden Milk

Golden milk is a warm, earthy beverage (I whip in a blender for extra froth), that claims to have the following health benefits:

These are strong reasons to drink it but there are also some cons to sipping Golden Milk (at least in my book). 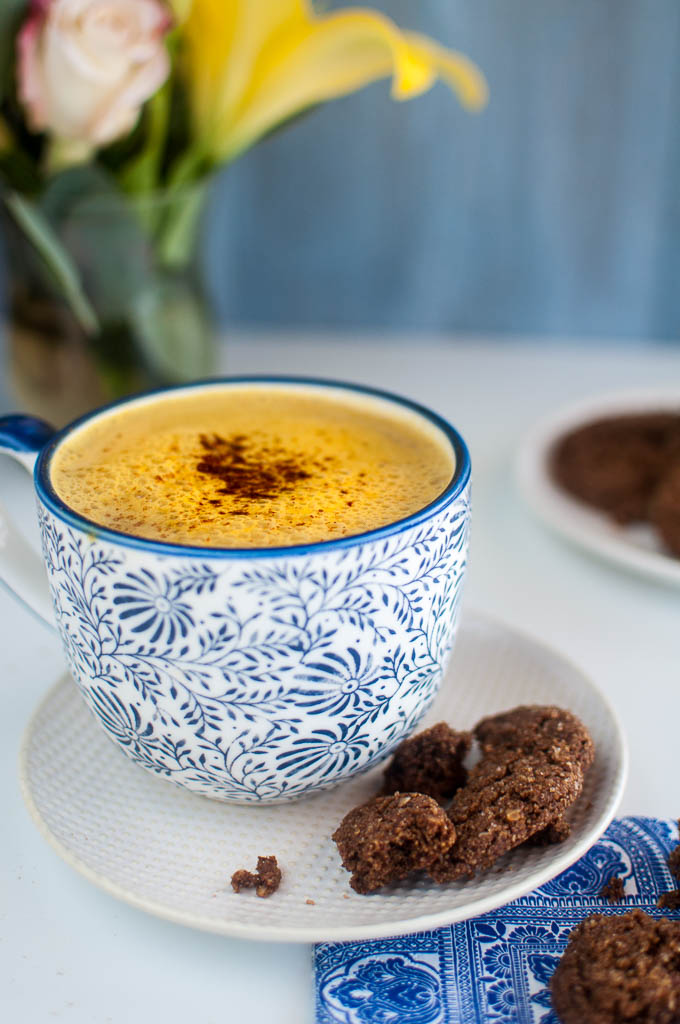 In addition to the Golden Milk powder, I add ground ginger, cinnamon, 2 Medjool dates, and Brewers yeast (because I add that to all my hot beverages – read about the benefits here). I’ve also tried it with different types of plant based milk. Coconut milk is sweeter than almond or soy but I like the additional protein in soy milk. Almond milk is my second favorite option. I prefer unsweetened NON-GMO milks that are carrageenen free (what is carrageenan?).

I love frothy, hot beverages, and I like the potential health benefits of Golden Milk so I’m curious to see what I will do when my tub of Golden milk mix runs out. What are your thoughts on Golden Milk? Yay or Meh??

Conventional methods use coconut milk but I prefer using almond or soy. I purchased a Golden milk mix from My Kind Organics because it incorporates black pepper which maximizes the absorption of Curcumin. I add a few spices and whip it in a blender with boiling vegan milk. This produces a hot, frothy, earthy, slightly sweet  golden drink that warms me up on chilly mornings (it’s also cozy at night since it doesn’t contain caffeine).

Add milk to a saucepan put on stove top on medium high (It is VERY IMPORTANT to watch the milk as it will boil bubble up and boil over if you aren’t careful).

Add all other ingredients to a blender and pre-blend to break up the dates.

Bring the milk to a ***boil and add it to the blender. PLACE A CLOTH OVER THE TOP OF BLENDER AND HOLD TOP FIRMLY DOWN WHILE BLENDING – the hot liquid shoots up to the top.

*** I like my beverages extremely hot so I boil the milk- but it’s critical to watch it like a hawk – once the milk boils, it foams up and doesn’t stop. 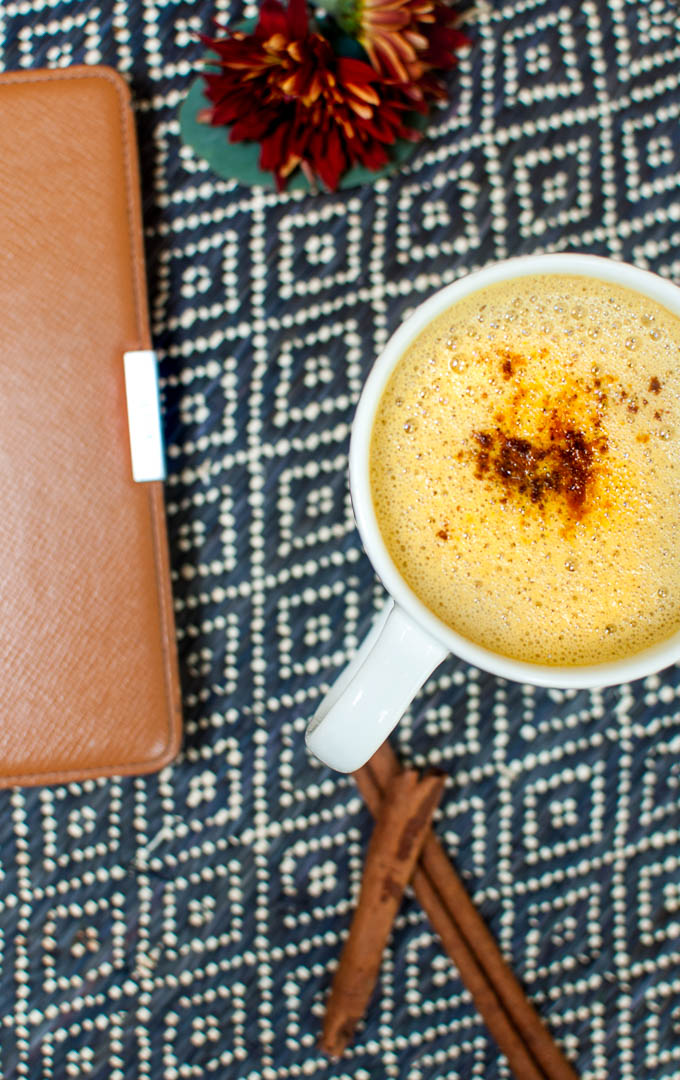